If you’re interested in Watauga Lake real estate, you know how much joy this lake brings its nearby residents–but did you know Watauga Lake is actually a man-made reservoir? In this article, we go over some Frequently Asked Questions about Watauga Lake so you can prepare for your next visit!

How Did Watauga Lake Come to Be?

Watauga Lake itself is actually the result of a dam put in place in 1942. While World War II redirected the dam’s construction efforts, these were eventually resumed in 1946 for the purposes of generating hydroelectricity.

Is There a Town at the Bottom of Watauga Lake?

Yes! Watauga Lake swallowed up some of Butler’s original buildings when the dam was constructed. The consequential reservoir flooded the historic town of Butler (sometimes referred to as “Old Butler”) as town residents moved Watauga Lake real estate to “New” Butler, where it has remained ever since.

What Does “Watauga” Mean?

With roots in the Native American word “wata’gi,” the authentic meaning of “watauga” has been lost over the course of history. Today, it is considered to mean “clear waters” or “beautiful waters” by those who love to visit the lake!

What County is Watauga Lake In?

Watauga Lake lies nestled between Johnson and Carter counties in northeastern Tennessee. It is located just outside the eastern edge of Johnson City as part of Cherokee National Forest, and nearly reaches Tennessee’s border with North Carolina.

How Big is Watauga Lake?

Watauga Lake sprawls over the map in several fingers–but added up, it equals just over 10 square miles in size! About 17 miles across, Watauga Lake boasts about 100 miles of shoreline. 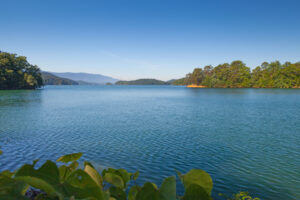 What Is the Closest Town to Watauga Lake?

The closest town to Watauga lake is Butler, located just north of the center of the lake, looking at a map. It is roughly a 22-minute drive from Watauga Lake real estate to the lake’s primary access point.

Watauga Lake is approximately 45 minutes northwest of Boone, NC, and 1 hour east of Johnson City, TN; these are the two largest, more developed cities in the immediate area.

How Deep Is Watauga Lake?

At its deepest point near the dam, Watauga lake is about 280 feet deep. Of course, its depth varies across its expanse–elsewhere, it is roughly 110 feet deep.

For those concerned about E. coli and other contaminants, rest assured that bacteria levels in Watauga Lake are low. In fact, Watauga Lake is considered the third-cleanest lake in the United States. This is perhaps due to its location in the Cherokee National Forest, which prevented human development along its shores. It is known for having clear, greenish-blue waters.

Can You Swim in Watauga Lake?

Because Watauga Lake is considered so clean, it is a great lake to swim in the summer months when the topmost water warms due to the sun. Watauga Lake does not freeze over in the winter; still, its waters are best enjoyed in the warmer months between May-September for the adventurous outdoor swimmer! Watauga Lake is fed by three primary water sources: Watauga River, the Elk River, and Roan Creek.

Watauga Lake is open from dawn until dusk on a first-come, first-serve basis. Over the winter months, the public restrooms are closed and winterized to prepare for the colder season–but you can expect them to be available for use in the summertime! Because the lake does not freeze over in the winter, you can expect boat activity on the lake even in the cooler months. For more information on visiting Watauga Lake, click here.

What Is There to Do at Watauga Lake?

On land, visitors can explore the nearby Cherokee National Forest, which is open to campers year-round. Don’t miss the Butler Museum, which covers the town history from its earliest settlers in the 18th century to the completion of the dam in 1848 which resulted in its destruction. Of course, there is a litany of different boating activities that enthusiasts participate in during the peak summer season–kayaking, canoeing, and sailing are all major attractions to the area, and the local Watauga Lake Sailing Club hosts races annually.

What Kinds of Fish Are in Watauga Lake?

In addition to swimming and other water sports, many people enjoy fishing Watauga Lake. Its waters contain walleye and bass, and have been known to produce award-winning trout!

Now that you know a little bit more about the “crown jewel of eastern Tennessee,” you may be looking for Watauga Lake real estate for your next vacation destination–or forever home! Whether you’re interested in a place to rinse off after an annual visit to its green waters or for a permanent place to retire, be sure to head to our contact page and ask us about current listings in the area!