If you, like us, are interested in all things Appalachia, you may be looking for houses for sale in Mountain City, TN. Whether you’re looking to call Mountain City home or are hoping for a high country vacation spot, your dream house could be just a few clicks away!

Those who are excited about the unique town of Mountain City may already know about its deep connection to Appalachian music demonstrated by the annual Mountain City Fiddler’s Convention. If you’re looking to visit Mountain City for this yearly event or searching for a permanent place to call home, you’re likely wondering about the best way to get there! In this article, we break down some basic travel information about getting to and from Mountain City, TN.

What Is the Nearest Airport to Mountain City, TN?

Looking to fly into Mountain City? The closest airport to Mountain City, TN is Blountville Tri-Cities Regional Airport (TRI), just over 60 miles away.

The closest international airport to Mountain City is Charlotte Douglas International in North Carolina; it is about two and a half hours’ drive away.

If you’re interested in visiting the area for its natural beauty and Appalachian charm or looking for houses for sale in Mountain City, TN, it’s important to know how to get to and from the nearest airport.

The most direct way to get to TRI from Mountain City is to head west on Main Street, hop onto US Highway 421 North for about 30 miles, then exit onto TN-394 West. Take TN-384 W until it reaches TN-75 South, then follow this highway until it brings you to Tri-Cities Airport, on the left. All told, this drive should take about an hour and a half.

If you are interested in taking a different route, it is slightly faster to get to TRI by way of I-81 South. From I-81 take exit 63 towards TN-357 and follow the signs to the airport with total drive time clocking in at just over an hour.

To get to Mountain City, TN from Blountville Tri-Cities Regional Airport, simply follow these steps in the reverse direction.

While you might think it’s faster to catch a flight at Knoxville’s airport from Mountain City, it is actually faster to fly out of Charlotte Douglas International Airport in North Carolina. This drive generally takes around two and a half hours; this is about half an hour faster than departing through Knoxville.

To get from Mountain City, TN to Charlotte Douglas International Airport, follow US-421 South to US-321 South; continue southbound until you reach I-85 North. Follow I-85 until exit 32 onto Josh Birmingham Parkway and the airport will be on your right. 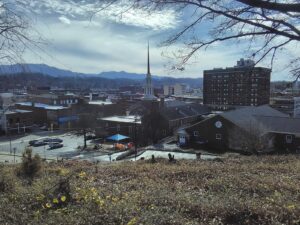 Regardless of whether you’re simply visiting Mountain City or if you’re a native to the area, at some point you may become interested in seeking the nearest major metropolitan area where you can get essential household items or services. While Mountain City is considered high country, it isn’t too far from more developed areas in several directions. Here are the closest major cities to Mountain City, TN:

Thinking of Transitioning From Visitor to Resident?

If you’ve ever been to Mountain City, you may feel, like we do, that it is a special place to call home. If you’re looking for houses for sale in Mountain City, TN, you’ll want to start with local experts who really know the market. If you’re interested in learning more, check out our contact info or browse through current listings to get started!