You don’t have to be an Appalachian fiddler to be looking for homes for sale in Mountain City, TN, but scores of the old-time musicians are known to flock to the area at least once a year! With deep roots spanning from Appalachian traditional music all the way into modern country, Mountain City keeps its residents connected to the spirit of the area in true high country style!

In this article, we take a look at the music that makes Mountain City shine as well as the historic festival it hosts once a year.

What Is Appalachian Music?

You don’t have to be a music historian to have an appreciation for culturally iconic musical movements–but you may be wondering just what Appalachian music is!

Appalachian music is the style of music originating from the region known as Appalachia in the United States. “Appalachia” is another name for the area spanning from southern New York down to the northernmost bits of Alabama and Georgia, and is considered central to the area between the Blue Ridge and the Great Smoky Mountains.

Appalachian music is largely influenced by blues music from African-Americans, African music, and fiddle music, ballads, and religious hymns from Scotland and the rest of the British Isles. It is generally produced by a combination of instruments including the dulcimer, banjo, American fiddle, and sometimes guitar.

The textures of Appalachian music have colored modern music in ways we can’t even imagine, especially the genres of country and bluegrass. Famous artists like Dolly Parton, Chet Atkins, and Loretta Lynn drew strong inspiration from traditional Appalachian sounds, which is evidenced by some of their work.

In the history of Appalachian music, several artists have achieved renown above the rest. Some Appalachian-style artists you may have heard of include Ola Belle Reed, Jean Ruth Ritchie, and Doc Watson, though one must mention Roscoe Holcomb, Lily May Ledford, and Hedy West as well.

The Coen Brothers film “O Brother, Where Art Thou” has a Grammy-winning Appalachian-inspired soundtrack featuring music from artists like Emmylou Harris, Gillian Welch, Alison Krauss, and John Hartford. Set in the American South during the Great Depression, this film follows the story of three escaped convicts in their attempts to thwart area law enforcement and stop a wedding, seek buried treasure, and ultimately reenter society against all odds. The storyline has been credited as a nod to Homer’s The Odyssey, though it is a loose interpretation.

Interested in starting your own journey looking for homes for sale in Mountain City, TN? Click through for available listings!

What Is the Mountain City Fiddler’s Convention?

Keeping traditional music alive requires that people routinely play it and contribute to its ongoing development. It is no different with Appalachian music.

The Mountain City Fiddler’s Convention is a long-held annual event that began in Mountain City in 1925. During this convention, musicians competed for a prize of $50 and a gold piece donated by Buster Brown Shoe Company worth $1000 in the current market.

Today, musicians and Appalachia enthusiasts from all over the world congregate to play and celebrate traditional American fiddle music, old-time folk, and bluegrass. One attendee has said about the experience:

If you were wondering whether authentic Appalachia still exists, look no further. 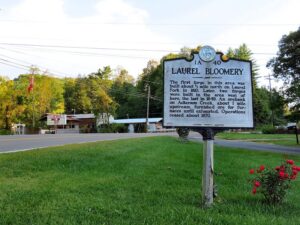 Are Appalachian Music and Bluegrass the Same Thing?

While these two genres of music are closely related, there are several distinctions that set them apart. One example is that Appalachian music predates bluegrass and significantly influenced its development. Both styles of music rely heavily on intonations from instruments like the banjo, for instance, which was originally brought to the American South by enslaved Africans.

While bluegrass music has undeniable roots in Appalachian music, the addition of “breaks” or solos where different musicians get to take center stage sets it apart. Appalachian music, in contrast, focused more on playing a song in complete unison, with less opportunity for virtuosity.

A Bit About Banjos

Q: How can you tell if there’s a banjo player at your door?

A: They can’t find the key, the knocking speeds up, and they don’t know when to come in.

Of course, not all banjo players miss the mark. (Earl Scruggs comes to mind.) While banjo players often find themselves the brunt of well-intentioned jokes, the banjo itself has a rich history reaching back in time and across the water. The banjo become popular among enslaved Africans in the Caribbean in the 17th century and migrated across the sea to North America one century later.

At its core, the banjo was an instrument created out of creative necessity, often using salvageable materials ranging from hollowed-out gourds to empty pots with a taught, animal-skin cover. Banjos typically have five strings stretched across their resonating body which players stroke with their fingers using fingerpicks.

Banjos are typically divided into two main categories: open-backed banjos, also known as “old-time banjos,” and resonator banjos, which are also known as “bluegrass banjos.” (Resonator banjos are preferred by bluegrass soloists for their ability to rise above the band and project their sound out to the audience during a “break.” Open-backed banjos, in contrast, tend to form a more homogenous sound with the band and generate optimal performance unity.)

Curious About Listings for Homes for Sale in Mountain City, TN?

Whether you’re looking to call Mountain City home year-round or hoping to secure a cozy mountain cabin, our current listings are a great place to start!

Have a question? Ask us today!